cakap cakap…aisehman, rocky got no other story to tell?

In “The King to Step Down?”, blogger steadyaku47, a Malaysian residing in Melbourne, mocks the King over the proclamation of the Darurat.

In these last few weeks one question and one question only, has been on the mind of all right-thinking Malaysians. What made the King decide that an Emergency is required? He did not have time to confer with his brother rulers before he made that decision. He did not have time to be properly briefed by the health authorities on the need for the Emergency. He did not go to the people to seek their consensus on what he was going to do. Did the king carefully consider his options and understood the consequences of his actions? Or was the King induced by generous offers of the material kind by TSMY to make him agree to the proclamation of the Emergency?

Life of Annie of Kuantan, capital of the King’s home state, has come to His Majesty’s defense (even though I know for a fact that personally Annie is against the Emergency). Annie’s Defend the Agong, please calls on the Agong’s media team to start defending the King against steadyaku47, while chiding the OZ-based blogger for being brave only because he’s based abroad. 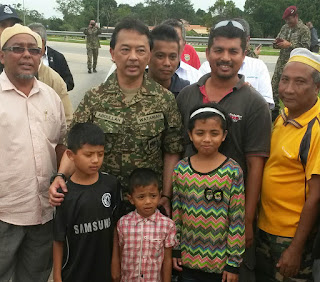 2015 pic courtesy of Life of Annie:
“I always see Sultan Abdullah as especially caring for his rakyat”

SteadyAku47 did another posting here attacking the King yesterday, which Annie describes as “even worse than the first one”.

And, while the King’s handlers consider their options, the blogger added another one today entitled Cash is king, or do you have to be a King to get cash? The Malaysian in Melbourne signed off with “Daulat Tuanku? I think not! Enough said”. But I have a strong feeling steadyaku47 hasn’t had enough; far from it.

It will be a pity, indeed, if the King’s media handlers don’t handle these postings properly. We all remember how our last Agong was brought down by the proverbial pen. Of course, back then A. Kadir Jasin’s pen was powerful because of what he was: the advisor to the then Prime Minister Tun Dr Mahathir Mohamad.

Steadyaku47, on the other hand, is just a blogger acting alone. Or is he?

Another blogger hantaming me! Again, I don’t know who he is and I don’t care. Suffice for me to just say this…go read what I write about the other Annie blogger who also did me the “favor” of giving “oxygen” to the pieces I wrote about the Sultan of Pahang aka The Agong. Just one slither of thought that crossed my mind when I read the above piece…”DON’T SHOOT THE MESSENGER.”

With regard to his musings as to whether this steadyaku feller is “just a blogger acting alone. Or is he?”….I have this to say. In this era of canggih technology and real-time news and information, even if I reside in Melbourne, I will know if the King accidentally knocks a cup of coffee off his breakfast table BEFORE that cup of coffee hits the floor! So brother Rocky, whoever you are, if you want to know anything about steadyaku47, just ask. Or better still, be decent and nice and show some courtesy to another fellow blogger. If there is one thing we bloggers do not need is to be hantam by another blogger. Life as a blogger is hard enough  without another one of your kind rubbishing you. Kan?

Spread the love
Tags:
Previous Article
steadyaku47 is now the News?
Next Article
You Never Can Tell.