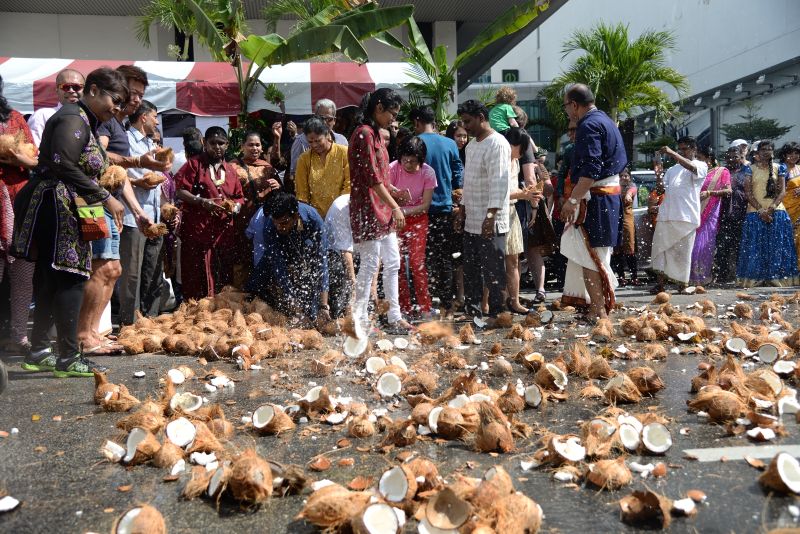 I don’t think he’s scoring any points even with the Malays …. even as a political move it was dumb…. we all know it’s dumb…. we’ve all denounced it ….. rather than continue with the ranting (we’re all angry…. me too…) let’s now focus on how to get dumb asses like this and his kin out of the system….(KAMAL AB)

With due respect, this response to the sudden cancellation of Thaipusam in Kedah is not a fight against the Malays in general, but against the action of one man who happens to be Malay. What they do in U.K. or Singapore is not relevant. If they had never given recognition to the festival before, as in Sabah, there would be no problem. But in this case, it is the withdrawal of a privilege without preliminary discussion that had already been established. Furthermore, when challenged he reacted with rudeness and insults. No politician, be he Malay, Chinese or Indian, or even as an office bearer, should be allowed to think he has a right to such behavior. (R B Barrow)

Since the discussion is still on Thaipusam, as an Indian Hindu, I wish to say a few words.

The issue really is not a.small matter. Minorities do matter. But having said that, the issue – IMHO – is the cancellation. Why cancel something that is already there? It’s a public holiday for the last 8 years for all. With every public holiday in Malaysia – and we have many – that is already there, every Malaysian does what he/she wants to do. Go somewhere, chill, invite friends, shopping, go to pray, etc. It’s a no work day, for all. Shops open. Cinemas open. If there is a holiday in Selangor, KL works. No issues. If he wanted to cancel any public holiday, some notice should have been given. Simple administrative leadership. If he wanted everyone in Kedah to be more careful with the MCO, a simple notice would have sufficed. People are already following the rules. The public holiday would have remained a public holiday for all.

But this cancellation with little notice smacks of racism and discrimination. Yes to win the hearts of Malays there. He’s demolished Hindu temples, now this.

Some have said that Thaipusam has not been gazetted. This is a major issue in my mind. How easy can a politician unilaterally play around with ungazetted items? For an item, any item like public holidays or land for that matter, to become something on the verge of getting gazetted, simply means it’s gone through many rounds. There are many religious days for all religions but just two in Hinduism that has gotten attention. For Sanusi to so easily make a decision to cancel an ungazetted public holiday is no different from an FT Minister slicing off an ungazetted public park to make money off it. Just like that. Why do we allow ungazetted anything from being raped by politicians in broad daylight? If he wanted to cancel anything, he should have just canceled his public holiday plans on the day. No one would have minded.

I think minorities have given ample latitude to the majority. We have endured discrimination, bias, every arrow that has come our way. We are second class citizens here. No issue. We don’t like it but we can accept it. So when a religious public holiday for all is canceled just like that, it’s another sorry slap on the face of the most minor of minorities. We live on. What’s next.(ANAND).

Very simple to me. He’s the champion for Islam and he looks down on ‘belum Islam’ as they like to call the non-Muslims. He wants to score political points with the Malays. So, he thought. He thinks all Malays are dumb like him. That is why the way forward is what GI (Gerak Independent) stands for. We must reject race and religious politics. Completely reject it. At the very least, return anything to do with Islam back to the Sultans. No Federal Government involvement. That was what our original constitution provided. (Siti Kassim)

To put in my two cent’s worth, It seems that our Malay politicians are doing their very best to make evryone hate the Malays. What… Read more »

This idiot is really ugly