In the Malaysian Police Force (PDRM), the rank of Deputy Commissioner of Police (DCP) is the fourth rank from the top, with Inspector General of Police (IGP) as the first rank. These ranks account for about twenty of the top positions in a force of about 140,000 persons.

The secretive Special Branch of the force has a division which focuses on social extremism.

At the time of the enforced disappearance of Amri Che Mat and Raymond Koh, DCP Datuk Awaludin Jadid was the Principal Assistant Director of the division, which is designated “E2.”

Testimony by and about Awaludin was a major reason why the Human Rights Commission of Malaysia (Suhakam) concluded that the Special Branch, Bukit Aman, abducted Amri and Raymond.

According to Awaludin’s testimony, E2 does not have operatives who infiltrate organizations or even tail persons of interest; E2 relies on research, such as monitoring news and social media and on information sent to it by sources; E2 channels information to Islamic and other agencies or ministries, who, if appropriate, will take enforcement action; E2 does not monitor how recipients respond to information provided to them by E2.

According to Awaludin, PDRM’s principal concern is maintenance of order and national security, subject to the rule of law.

Awaludin, during his service which extends to about 40 years, qualified for bachelor’s and master’s degrees in law, from University Malaya.

In his testimony on Wednesday (6 January 2021), he was bold, confident and eloquent. Yet, I think his testimony thoroughly discredited PDRM.

I think he showed contempt for Suhakam, the judiciary and good policing. I say so because of responses he made, such as the following:

1. He refused to agree or disagree that the Suhakam panel – comprising a retired judge of the Court of Appeal and two law professors – had made correct inferences from a speech he made on 6 November 2016. (Paragraph 115 in Suhakam’s Amri Che Mat Decision.)

2. In the speech he even claimed Shiites are a threat to national security and that Shiites had infiltrated the judiciary. In his testimony he clarified that he meant the civil judiciary. Considering his education and experience, I think he knowingly fanned passions which could lead to “vigilante” action – a conclusion which he says is a misreading of his speech.

3. He said only those who had been present would understand his speech – even though many watched a video of his speech which was made available online. I can’t help wondering what his response would be if I had made a similar response while he interrogated or prosecuted me.

4. He said it is appropriate to arrest innocent religious converts and detain them without trial, if doing so may help prevent disruptions of national security by some objectors to conversions. (The context was the ISA detentions of Joshua Jamaludin and Hilmy Mohd Noor during Operation Lalang in 1987. Awaludin was the Investigating Officer. Joshua’s case was a landmark in that a habeas corpus application was allowed in an ISA case.)

5. Yet, he said “the conversion itself is none of [PDRM’s] business. The reaction of the Muslim public to the conversion is our business.” He said he [E2] limits his response to advising Muslims to watch out for conversions. But, in his 2016 speech, he did not ask his listeners to respect Article 11 of the Federal Constitution which guarantees freedom of religion.

6. He said it is okay to interrogate persons using police powers, even if there is no evidence of any crime committed by them. (The context was his mention of interrogations of converts during the said speech.) He insisted the ISA allowed for such actions – despite a decision to the contrary by the Supreme Court (now the Federal Court).

7. He said it is okay for him, a public servant, to speak “as a Malay-Muslim” while carrying out his duties as a police officer. (The context was the lack of neutrality in his 2016 speech.)

8. He said he cannot remember the police slogan: “tegas, adil dan berhemah,” (firm, just and prudent). What could more clearly demonstrate a senior officer’s contempt for his superiors, peers and subordinates?

Those are the views of a 40-year veteran of the police force who retired with the fourth highest rank. The views reveal disregard for judicial interpretations of the law, disregard for neutrality of public servants and a cavalier attitude towards persons who are innocent of any crime.

I wonder what conclusions the never-released report of the Bogus Task Force into the disappearance of Amri drew about Awaludin, whom they must have interviewed, for, as I said above, Awaludin is a key link between Amri’s abduction and the Special Branch, Bukit Aman.

Remember, the members of that “task force” – formed 19 months ago – include the head of the Integrity and Standards Office of PDRM, a retired High Court judge, a member of the Bar and many other “worthies.” 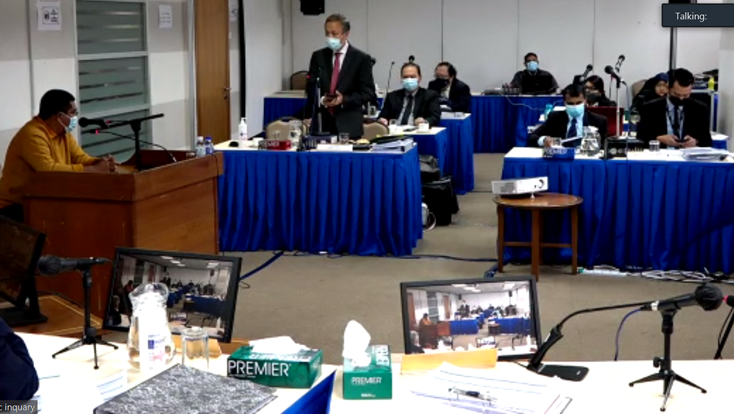 This is just too scary!!! Indeed a very sad news as we are living under such manner. Sad just sad.

WE NEED YOUR HELP!