Crime and Punishment – the reality.

What is the reality in Malaysia today? Is Najib and Rosmah ever going to be convicted of any crime? And even if they are convicted are they going to spend any time in Jail for their crimes. What about the BN Ministers and the Government officials who aided and abetted these politicians in pillaging and plundering the national coffers? Almost two years after taking Government, our faith in PH’s political will to punish these criminals has started to waver. In contrast, I remember BN’s ability to punish those whom they considered as being a “problem” to their cause. They sacked the DPM and the AG. When Tun Mahathir became a thorn in their side, Najib dismissed Tun from Petronas, cut down privileges accorded to Tun and went about appointing his men to positions in Bank Negara, Felda, PDRM… anywhere he wanted “yes men,” he installed them in a heartbeat. BN intimidated and bullied anyone anywhere and the message was clear: you go against BN at your own peril.

What PH is now doing to bring those BN criminals to justice is pathetic!

The reality is that Arul Kanda, Jho Low, Apandi, Khalid that tweet of an IGP, Irwan Siregar, Azeez and a herd of others who were all in thick of the corruption and abuse of power during BN’s reign.. the list is endless….all of them are still enjoying the spoils of their abuses and still walking among us as free as a bird!  Why are these people walking around thumbing their nose at this PH government? Is Tun’s Mahathir “rule of law” powerless? Surely justice must not only be done but must be seen to be done! The message to all these people and others like them is worrying to those of us who voted to put PH into Putrajaya. It tells Malaysians that you can continue to do your dirty deed because the law will always be playing “catch up” with you. The rule of law is not a deterrent for those who are corrupt and for those who use and abuse their position in government for personal gain. It is time that this PH government put the fear of God by making the rule of law a reality, not a mirage! Though, if you were to be so bold as to steal a tin of Milo, not only the fear of God will be put into you but the might and power of the judiciary will be used to tell you that crime, in Malaysia, does not pay! Huh…someone, somewhere has got their priorities in a knot! 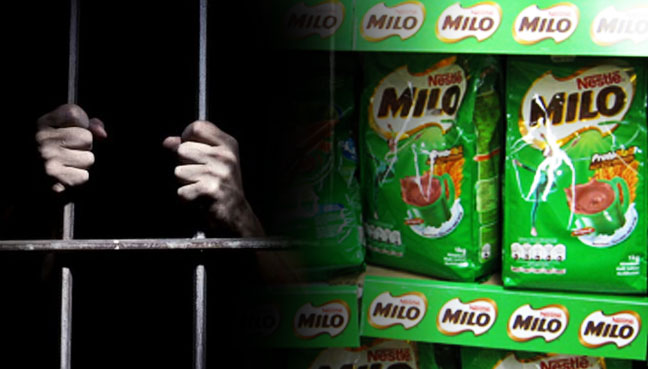 KUALA LUMPUR: A woman was sentenced to a day’s jail and fined RM200, in default five days’ jail, for stealing a packet of Milo for her two-year-old child at a supermarket here. Magistrate Husna Dzulkifly handed down the sentence on S. Sellamah, 36, who pleaded guilty to the charge. She was charged with stealing the 2kg-packet of Milo at the KK Supermart & Superstore, Jalan Hang Lekir, Dang Wangi.

▼ -4
Embed
Use the code below to embed on your website ❌

Immigration…just the tip of the iceberg?

THE FLOW OF CORRUPTION.